Baisha (literally translated as “White Sand”) located in the north of Lijiang. Before 1270, Baisha was the capital of the Naxi Kingdom. The ancestors of the Naxi people crossed the Jinshajiang River (also known as “Golden Sands” River), came down from Jade Dragon Mountain and finally entered Lijiang Basin. The first place they arrived in Lijiang was Baisha. Here, they set up the first settlement and created their culture.
We can find the earliest Naxi architectures of Lijiang in Baisha. They were built in the early days of the Ming Dynasty (1368 – 1644) with a simple and unsophisticated style. All the traditional old Chinese houses along the cobbled lanes are still looking like part of the ancient period except some of them are now turned into shops for selling arts and crafts to visitors. There are also four old men playing local Chinese musical instruments in the village.
The other attracting part of Baisha is probably the frescoes, which were made in the Ming Dynasty. It is a great work of art that reflects the multiple cultures at that time. All of the Baisha murals are about religion. They are attracted because of their distinctive characteristics and precious historical connotations. However their uniqueness comes from the fact that they are the combination of Buddhism, Taoism and Lamaism, which is quite a rare phenomenon.
The present murals are all kept in Dabaoji Palace and Liuli Temple in Baisha. All of the 55 murals were masterpieces in the Ming Dynasty. The frescoes portrayed scenes of ancient human lives with the facial expressions that are vivid enough to show their happiness, anger, sadness and joys.
Baisha was also long known for the practice of Dr. Ho (He Shixiu) ‘s herbal clinic on the snowy mountain. The latter died in September 2018, but the cabinet remains open, his son to take over. If you need, you should always be able to make a quick consultation and then receive a small mixture of herbs to go into balm or drink infusion.

In Baisha, do not miss the visit, with one of our guides, of the Mu family silk embroidery school, which is quite exceptional. Open from 9h to 17h30, free admission. There is a more modern school and commercial having opened in front, with storefront, it’s easy to be wrong between the two, but the quality of the embroidery speaks for itself … 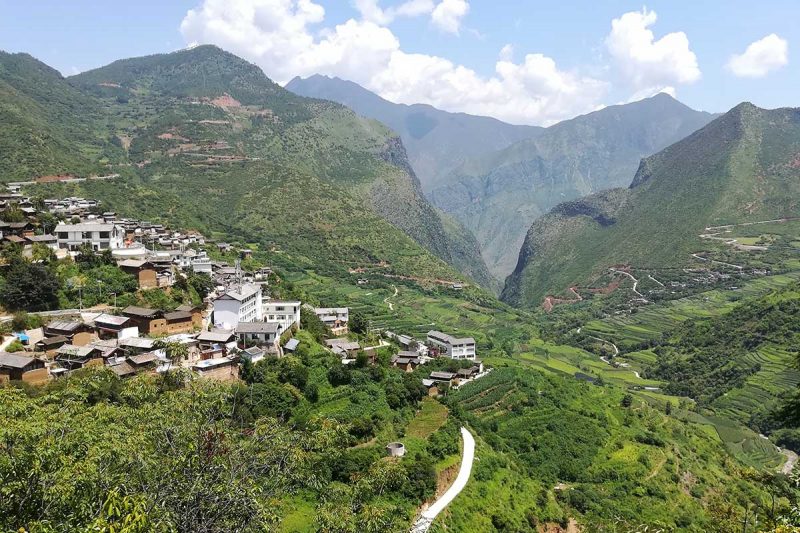 Baisha : all our tours and trips