Pudacuo National Park is a huge natural park located outside Shangri La in northern Yunnan, and was the first national park created in China. It includes the lakes of Bita and Shudu.

The Bita Lake is 35 kilometres East of Shangri La Old Town. This emerald lake contains 160 hectares; its surface is reported above sea level 3539 meters, while the deepest point is around 40 meters.Bita Lake is legendized a woman from the sky broke her mirror into pieces during her combing. They fell to the ground then became various lakes in the world, while the Bita Lake is one of the most gorgeous pieces inlaid with the smaragdine.In Tibetan language, Bita means a place covered with a dense oak forest. The Bita Lake is a fault lake, which lies in the heart of the natural preserved area surrounded by mountains and covered with century-old pines, willows and spruces.In the centre of the lake, a small wooded island is made to be the shelter for many rare species of flocks. If you are lucky enough to be in the non-windy day, the rosy clouds, the snow mountains and the nearby forests are all mirrored in the lake.The Bitahai Lake has plentiful fish resources. Every year, in the fifth month of the Lunar calendar, petals of the azaleas fall into the lake’s surface and are eaten by the fish. The fish look drunk because they float with their belly facing the sky on the surface, that forms the famous spectacle of “Fish drunk by the azaleas” in Bita Lake.

Well-known for its emerald waters and the distinctive species of fish, Shudu Lake attracts not only the tourists but also roosted flock of wild ducks. Shudu Lake surrounded with numerous mountains. On the east side of the lake there are plenty of birch tress, during every autumn, it shows a piece of golden colour.Shudu Lake has the capacity of 15 square kilometres. With the location of 3705 metres above sea level, it becomes one of the biggest highland lakes in Shangri La. Its annual average temperature is 35 Celsius degrees. Rainy seasons are between every June to October, rainfalls can up to 5800 mm.

The best way to get to Bita and Shudu Lakes and Pudacuo National Park is to have a private car. Inside the park, obligation to use one of the new “greenbus” set up by the local government for the protection of the site. It will cost approximately 500 RMB roundtrip. For a day trip to the park, you can of course combine the visit of 2 lakes, 20 km away; you can also hike in the small trails through the forest. Provide a guide in this case. A beautiful hike will also take you to the remote Tibetan village of Niru. 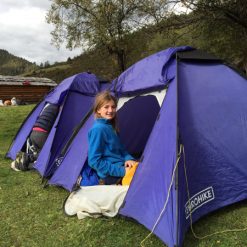